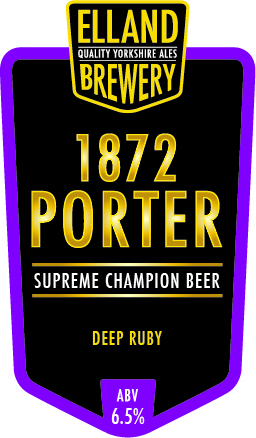 Today I have chosen one  of the most successful beers of recent times as my beer of the day. Few beers in the recent past have gained as many awards as Elland ‘1872 Porter’.

It claimed its first award back in 2004, but really reached its peak in the 2010’s being three time winner of the Champion Winter Ale, and the ultimate accolade, Camra Supreme Beer of Britain in 2013.

So it must be good. It is a strong ruby porter,(obviously); it is English hopped but the real star of the beer are the four malts and the way they are used to provide complex depth and flavour. At is best they bring out notes of deep red wine, bitter chocolate, and coffee.

It is apparently based on an original 1872 recipe hence the name.

Locally it is fairly widely available, but is an almost regular at the Cherry Tree, and seems to be a fixture at the newly opened Plumbers. 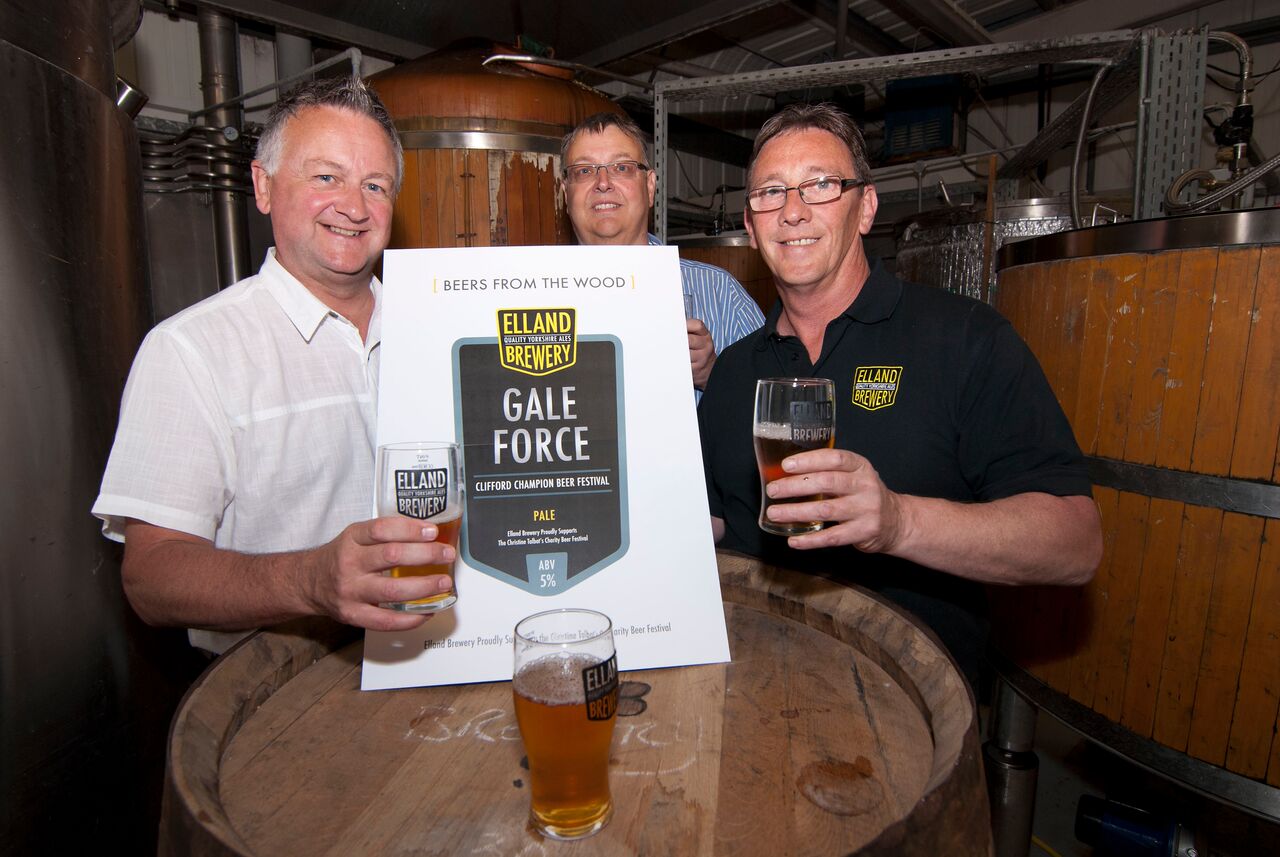 We are delighted to be involved with Clifford Champion Beer Festival for the seventh year. It is always a pleasure to work with Jon Mitchell, Duncan Wood and Christine Talbot from Yorkshire TV and support the charities who will benefit from the beer festival. We are pleased to supply four beers in wooden casks through working in conjunction with The Junction, Castleford.

Jon Mitchell said, ‘The Gale Force ale that Elland have brewed for me is superb. I’m sure my hoppy Gale Force IPA will outsell Duncan’s Wood You Believe it bitter.

Gale Force is a 5% IPA easy drinking pale ale brewed with US and NZ hops that give a combination of fruit flavours.

Wood you believe it is a 4.6% premium golden bitter with fruity citrus flavours and aroma.

Clifford Champion Beer Festival is sponsored by Beadnall & Copley estate agents and is a registered charity, all proceeds are equally shared by Clifford AFC and Clifford Village Hall supporters. 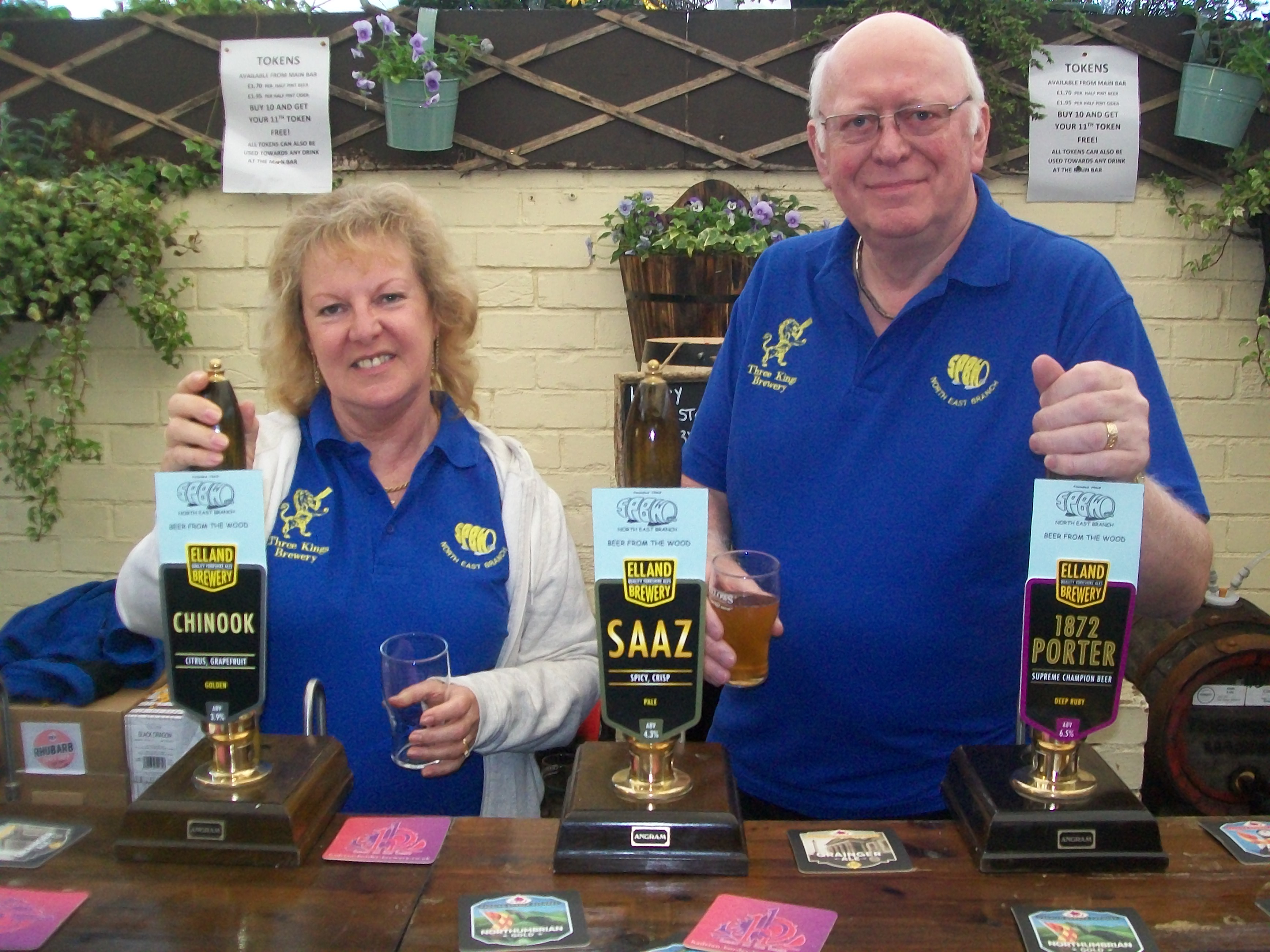 Recently, the 4th Traditional Wooden Cask Real Ale Festival was held at the Oddfellows pub in North Shields. We were very pleased to supply three of the fifteen beers. The festival in general and out beer in particular went down very well. The first beer to run out was not surprisingly our 1872 Porter.

At 3.9% ABV Chinook is a single hopped golden session beer. A hint of spice, strong citrus and grapefruit aroma and flavours. It is the newest addition to our core range and is already a firm favourite amongst our regular customers.

Saaz is a 4.3% ABV beer inspired by Czech Pilsners. A straw coloured pale ale, it has a crisp clean malt flavour and is generously hopped to give distinctive spicy and herbal flavours.

Needing no introduction but we will give one anyway, at 6.5% ABV 1872 Porter is arguably the most decorated beer in recent British brewing history. A rich, complex, dark ruby porter from an 1872 recipe. It has an old port nose, coffee and bitter chocolate flavours from four malts including finest Maris Otter and English hops. Supreme Champion Beer of Britain. Three times National Winter Ales Champion. 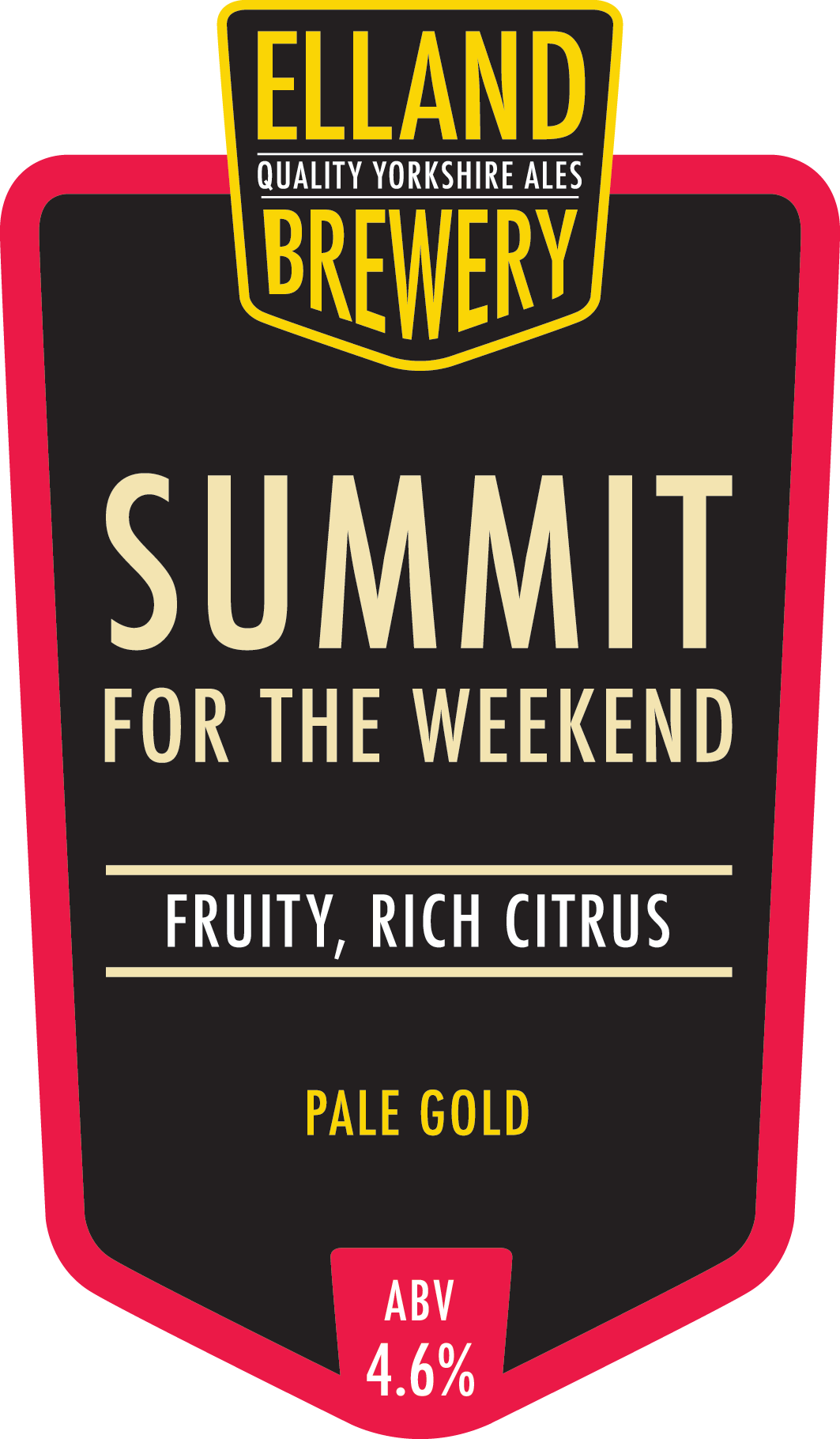 We were recently very proud to provide one of our seasonal beers for a very special event that took place at the Brigantes pub in York.

Having successfully secured the dream job as apprentice to the only Master Cooper in the country, Alastair Simms at the White Rose Cooperage in November, he recently signed his indentures and received his “official personal tools” at the Brigantes public house in York. Around 25 work colleagues, family friends, customers and dignitaries gathered to witness the rare event of this marking his becoming one of a few apprentice coopers in the country. The ceremony was carried out by the Master of the Worshipful Company of Coopers, Vivian Bairstow. Vivian and his colleague Adrian Carroll made the long journey from London and John Gaffney from the National Cooperage Federation travelled from Edinburgh to make the presentations to Kean.

With the kind cooperation of the Brigantes team headed by manager Kev Jones, Summit for the Weekend (4.6% ABV) in a wooden cask was appropriately on the bar to celebrate the momentous occasion. 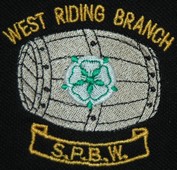 We welcomed around 25 members of the   (Society for the Preservation of Beers from the Wood) on Saturday for a brief tour and plenty of supping of Blonde, Beyond the Pale (both from the wood) and Nettlethrasher. An added bonus was the first ever coopering demonstration from Kean Hiscock, the apprentice at White Rose Cooperage. The lad done good. He would also like to thank the brewery and everyone who visited for their generosity via their collection to raise funds to support him for his summer tour to Canada with the England Lions U19 Rugby League squad. 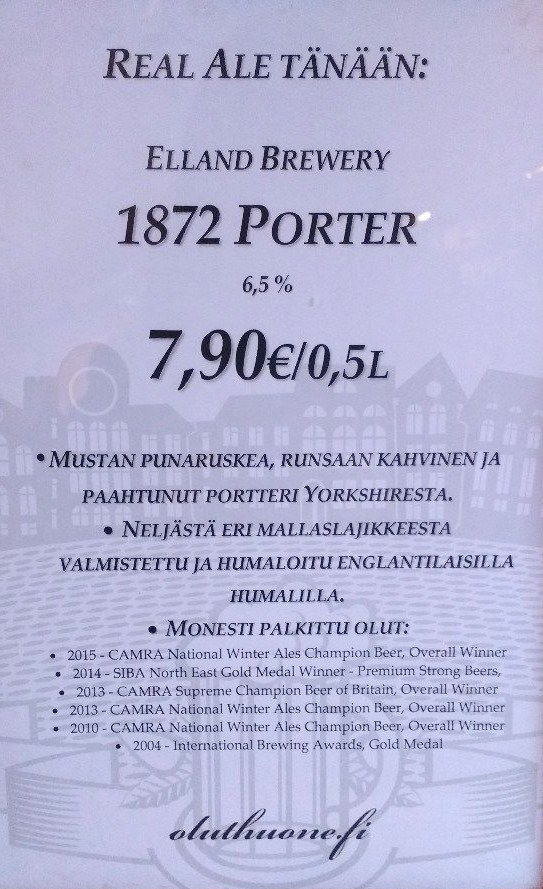 Further to our recent post re Janne Lehvonen finding our flagship beer, 1872 Porter on handpump in Helsinki, here are a couple more photographs proving to any doubters that it was not an April Fool. 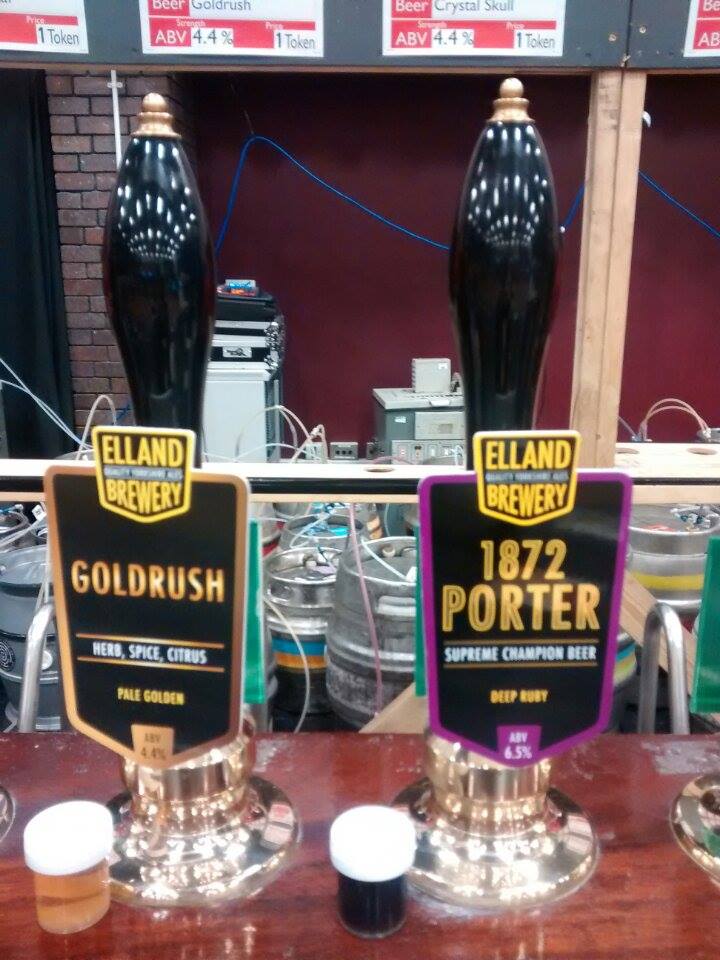 We are pleased to have supplied CAMRA’S 40th Newcastle Beer & Cider Festival with two of our beers, namely Goldrush and 1872 Porter.

Goldrush is a 4.4% ABV and pale gold in colour. It has a floral, herby & spicy aroma with refreshing citrus flavours & a long full hoppy aftertaste.

1872 Porter is a 6.5% ABV with a rich, complex, dark ruby porter from an 1872 recipe. It has an old port nose, coffee and bitter chocolate flavours from four malts including finest Maris Otter and English hops. Supreme Champion Beer of Britain. Three times National Winter Ales Champion. Now resident once again in his home country of Finland, former regular at the Junction in Castleford and most certainly a lover our beers, Janne Lehvonen has just found our 1872 Porter in Helsinki. Quite a discovery and a reminder of his adopted county of Yorkshire.

At 6.5% ABV our 1872 Porter is a beer which really needs no introduction. Arguably the most decorated beer in recent British brewing history. A rich, complex, dark ruby porter from an 1872 recipe. It has an old port nose, coffee and bitter chocolate flavours from four malts including finest Maris Otter and English hops. Supreme Champion Beer of Britain. Three times National Winter Ales Champion. 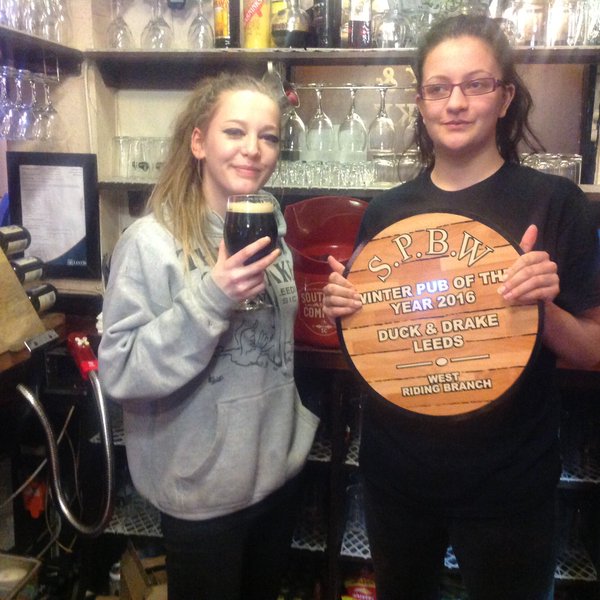 The Duck and Drake in Leeds was recently voted as Winter Pub of the Year 2016 by the West Riding Branch of SPBW (Society for the Preservation of Beers from the Wood). The presentatation was made to the pub last night and to celebrate the award some of our beers were available from the wood. The pub owns a number of wooden casks and we were most happy to fill three of them for the occasion with Nettlethrasher, Pilgrim IPA and the multi-award winning 1872 Porter.

At 4.4% ABV Nettlethrasher is is our premium “Best Bitter”. A copper flavoursome ale, complex and fruity. Made from a combination of six malts, complimented with English Challenger and Bramling Cross hops to give a smooth fruity character and delicate blackcurrant aroma.

Pilgrim is a 5.0% ABV single hopped straw coloured India Pale Ale with deep fruit and spice flavour and aroma with a refreshing bitterness.

Needing no introduction but we will give one anyway, at 6.5% ABV 1872 Porter is arguably the most decorated beer in recent British brewing history. A rich, complex, dark ruby porter from an 1872 recipe. It has an old port nose, coffee and bitter chocolate flavours from four malts including finest Maris Otter and English hops. Supreme Champion Beer of Britain. Three times National Winter Ales Champion. 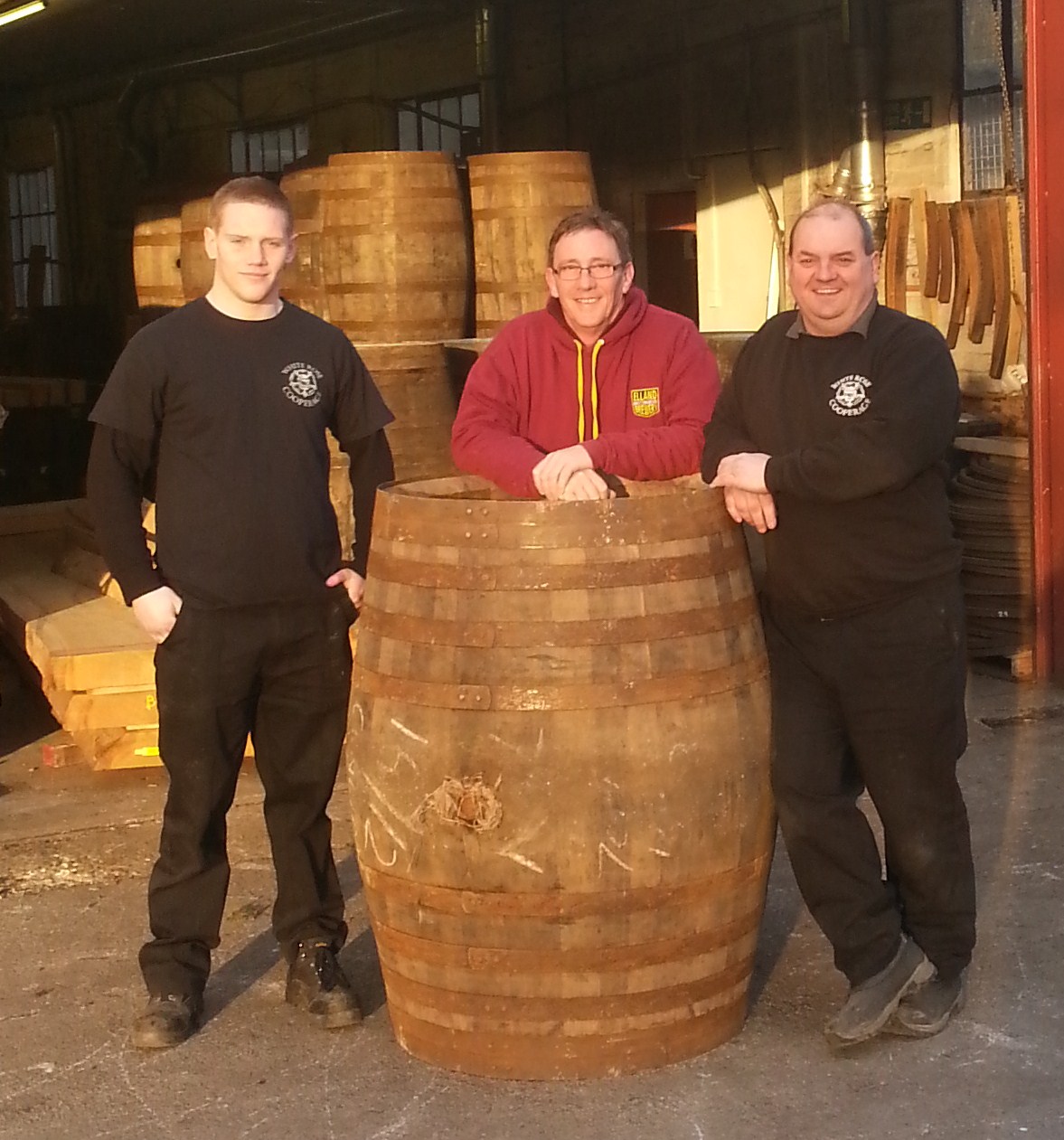 We are delighted to have purchased a Butt for ageing our beers.  Mike (the Boss) collected the vessel today in the early morning sunshine from Alastair Simms and his apprentice Kean at the White Rose Cooperage at Thorp Arch near Wetherby.

A Butt is equal to half a tun or 2 hogsheads or 3 barrels or 12 firkins or is simply 108 Imperial gallons. This one originally contained sherry but latterly contained a 10 year old Vintage Single Malt Whisky from Glenrothes Distillery which has now been bottled at a specialist plant in Perth. Look out for some lovely aged beer from Elland Brewery. Naturally a wait will be involved!